Occasionally in the library, I encounter books with covers so badly damaged it is easier (and cheaper) to recase the text block than to mend the original covers. Recasing is also a treatment option for damaged books that are not especially valuable.
This is an example of a book I recased. It was originally a quarter bound leather, tight backed (fastback), with marble paper covered boards. The paper was torn and faded with dirt and age. The spine had completely delaminated and split off the front board (Top). Delamination at the spine also caused the text block to split (Bottom). 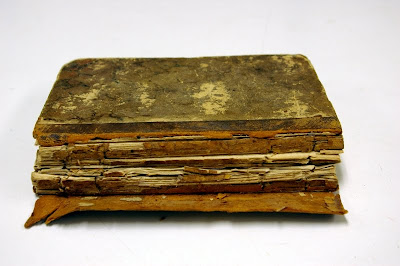 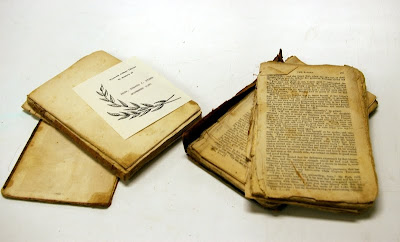 I started by removing the cover. I pressed the sections of the text block together between boards, and cleaned the spine with methyl cellulose to removed the old liner and adhesive. The sewing was cut in several places, so I had to pull the text block apart. I washed and deacidified the sections in filtered water and magnesium bicarbonate [Mg2(CO3)2]. After the pages dried, I repaired damaged areas with heat set tissue, and guarded each section using wheat starch paste and Japanese tissue. I realigned the signatures, resewed the text block, adding dove gray endpapers and lined the spine with Japanese tissue. The addition of materials from guarding caused swell in the spine, so I rounded it to reduce this swell.
I decided to mimic the original case design with a quarter binding in PC4 paper. I cut the boards to fit, attached the PC4 spine and trimmed the PC4 to be even and straight on both covers. Next, I covered the remainder of the boards with book cloth. Then I trimmed the turn-ins, infilled the boards, and attached the text block. After pressing the book with jointing boards, I attached the labels, which were pre-coated with Klucel G to prevent the ink from smearing (Summer 2009). 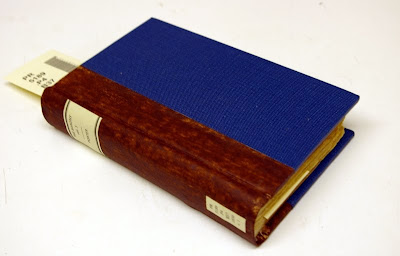 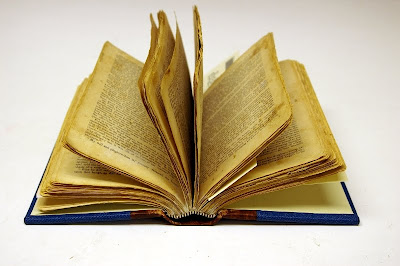 The above image on the left shows the finished product and the right depicts the stability of the text block after treatment. The below images are additional before and after examples of recased books. These book were bound entirely in book cloth (2008). 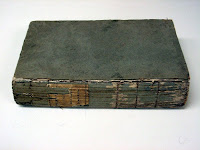 A friend of mine was dog sitting, and the puppy urinated on a print she had leaned against the wall. The original matte and foam core were badly stained. Luckily only the lower right-hand corner of the print was affected. In order to remove the urine, the print needed to be washed. I first tested the inks by wiping small areas of each color with damp q-tips. This is a before picture of the corner. 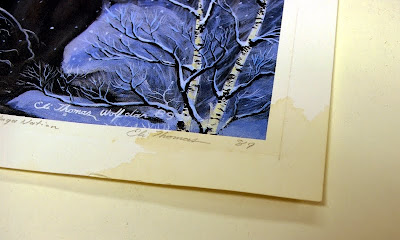 I washed the print between sheets of reemay in a filtered* water bath (Top). This removed most of the staining. Some areas were worse than others, so I removed them using filtered water on a vacuum suction table. I dried the print in the drying rack, and then reintroduced moisture using Gortex and pressed the print under weight to flatten it again. The picture on the bottom shows the corner after washing. 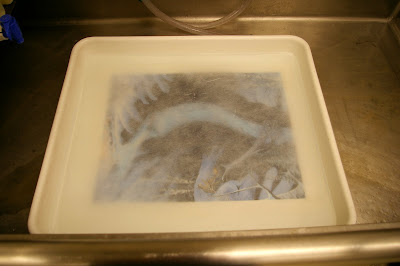 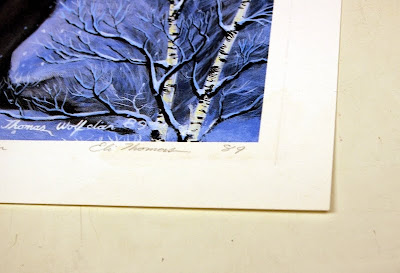 I was unable to wash the matte board. I cut a small piece of similar matte to test, and it completely delaminated in water. So in an effort to soften the stain, I sprayed the stained area with isopropyl alcohol, and walked it out along the edge. This did sterilize it, but did nothing to the stain. I did keep the matte and return it to the owner because the artist's insignia (a small paw print) was cut into the board.
The foam core was completely ruined. The artist statement was attached to the back of the foam core, but was not affected by the urine stain. However, twenty years had made it highly acidic. After removing it from the foam core, I washed it between reemay in filtered water, then deacidified it with a magnesium bicarbonate solution (Mg(HCO3)2). These images show the before (Top) and after (Bottom). 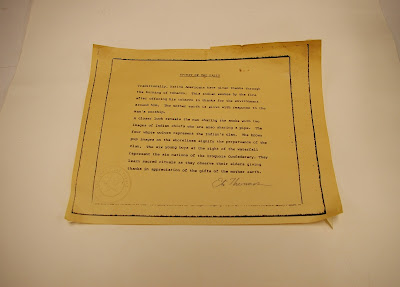 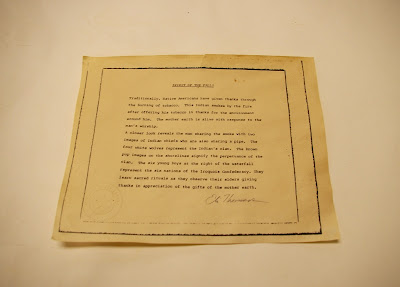 I cut a new matte for the print, but left the artist statement detached, in an archival envelope, in case the owner wanted to get the image re-matted by the artist. 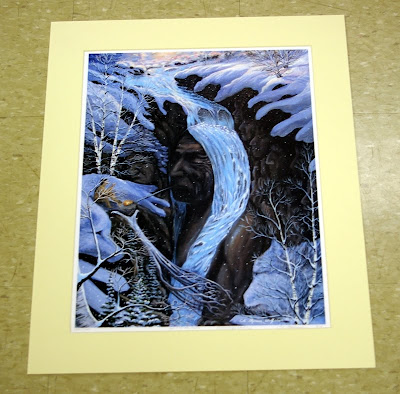 *The Syracuse University lab does not have de-ionized water. Instead, the water is run through a particle and charcoal filter.
Posted by Sam... at 11:05 AM No comments:

There are several dry techniques for cleaning paper, including the use of white vinyl erasers and smoke sponges. Smoke sponges are made from vulcanized natural rubber, and are the same product used to clean smoke dust of walls after building fires. They come in large bricks, which we cut in to smaller pieces in the lab, and then gently rub on the surface of the paper.

This is a print I cleaned and re-framed. The glass was originally stained yellow in several areas, and the protective lining around the edge of the frame had split, which enabled insects to get inside. There were two dead silverfish pressed under the glass. I removed the print from the frame and took this picture. 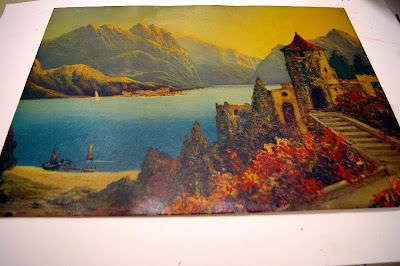 I noticed the image had a lot of surface dirt. It was also evident from the consistency of the brushstrokes that this was a replica, with some sort of clear coating on the paper. I tested an inconspicuous area with the smoke sponges, which removed substantial dirt without damage to the paper. I continued to treat the image with smoke sponges. This image shows an area that was partially cleaned. The left side is untouched, and the right side was treated with smoke sponges. 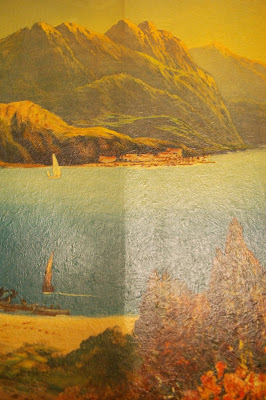 After treating the entire image with smoke sponges, I cleaned the glass from the frame. Most of it had to be scraped with a razor to removed caked on dirt. I also cleaned the frame with smoke sponges. I reframed the image, adding a new backing board of corrugated cardboard, and lined the backing board/frame edge with linen tape, so there was no gap in the back. I also replaced the framing wire. This is the finished object after treatment (Summer 2009). 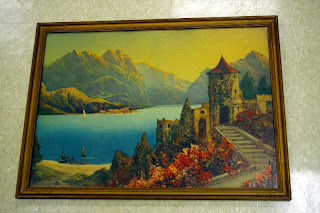 Japanese paper is commonly used in book repair because it is thin and strong. For joint and hinge repairs, the paper is cut into thin strips, just wide enough to cover the damaged areas. Don Etherington suggests using morike for the outer hinge because it comes in a variety of colors to match the cloth or leather. He also advises coating the morike in Klucel G because it darkens the color and prevents the paper from fraying when rubbed.*
These strips are adhered to the area with either polyvinyl-acetate (PVA) or a starch paste. (PVA is used for leather bindings or book covers, and paste is used on any part which touches the text block). It is crucial to remember to treat the inside of the hinge first. Even though the Japanese papers are thin, sometimes they create enough swell to split a previous repair on the outer hinge.
The following images depict basic Japanese tissue repair on a leather binding. This particular book had a leather inner and outer hinge, and almost no joint. Because of this, use caused the leather to crack (Top: cover view; Bottom; inner hinge). 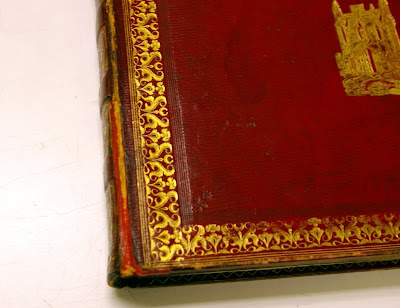 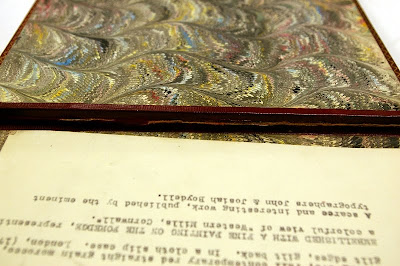 PVA was used to attach thin strips of Japanese tissue to cover and support the damaged areas. After drying, the tissue was toned with acrylics. Then I applied SC 6000 to the toned area on the cover. The SC 6000 will protect the acrylic pigments from cracking with use, and also ads a slight shine, which mimics that of the leather (Summer 2009). 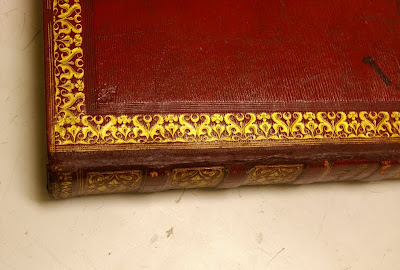 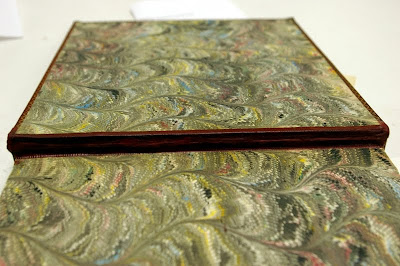 *Use of Japanese Tissue in Conservation, presented by Don Etherington as part of the CBBAG Restoration and Repair: Part of the home study programme.
Posted by Sam... at 9:20 PM 2 comments:

The first thing I learned to do was construct phase boxes. This is a effective prevention treatment because the boxes are dimensionally stable, hold the book securely and protect against dust and dirt. The materials and time (approximately 15 minutes per box) can be costly, therefore phase boxes are reserved for special collections. There are two basic techniques, a one and two piece box. Manuals for construction are available online at:
http://libwww.syr.edu/information/preservation/manuals.htm
I have used both techniques. I find the two piece box enables you to use materials more efficiently, but I prefer the one piece because it is faster. These are some images of a two piece phase box in various stages of completion (Summer 2008). 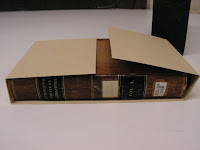 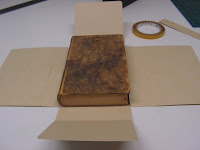 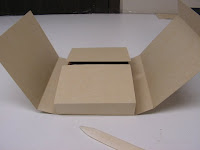 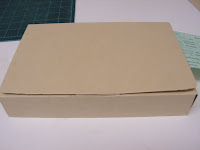