This pamphlet was originally housed in a pamphlet binder. The binder was old and acidic. 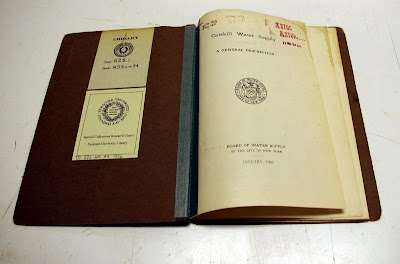 The pamphlet had been attached to the binder with a book cloth hinge. The first and last pages were still attached with this hinge, but the rest of the text block had broken away. 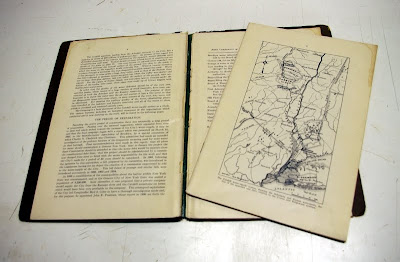 The first step was to remove all the pages from the binder. I cut the attached free using a scalpel. Next, I removed the book cloth. I was able to peel it off dry because the adhesive had deteriorated. Then I guarded the loose pages together using heat set tissue, and resewed the pamphlet. Finally, I rehoused the object in an archival envelope. 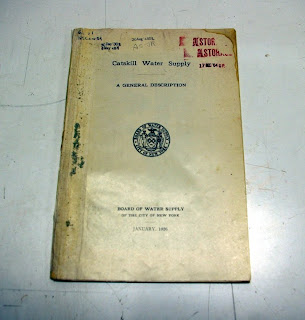 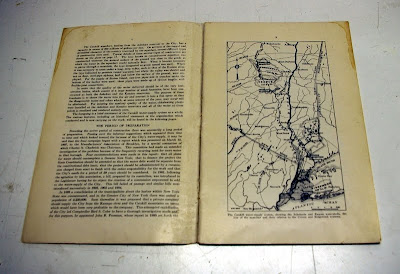 This particular book's spine had broken at the joint. The bottom half was also missing. Since the inner hinge and muslin lining were intact, a complete reback would have been overkill.

To infill the missing piece of the spine, I cut a piece of 10 point board the width of the spine and the height needed. I used a Morike similar in color to the cover material to attach the 10 point board and to repair the joints and end caps. This is the completed repair. 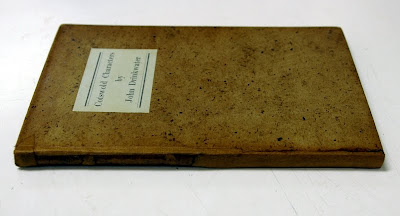 I have made one German style Springback before, and decided to make another, smaller one. Following these instructions, I made this. 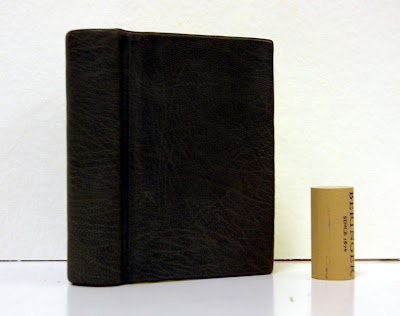 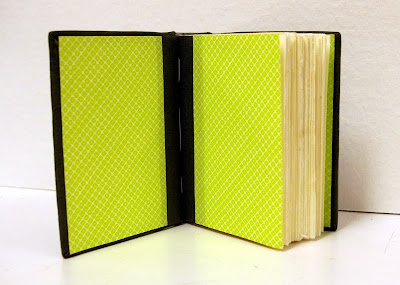 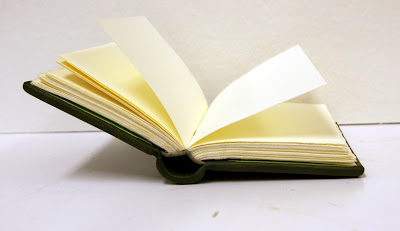 Note: Because my Springback was bound in leather, not only did I have to pare the edges, but I also had to pare the joint so the material would fit into the groove. I  was able to do this by first drawing a line where the grooves would be. Then, placing a brush handle under the line and running my paring knife along it. This removed a small amount of the leather, and gave me a guide to work from. I pared the rest thin using a scalpel.
Posted by Sam... at 4:04 PM No comments:

Besides the codex, we also encounter pamphlets, limp paper bindings, newspapers, etc. Sometimes these materials have some damage, but do not warrant intensive repair. In those cases, we can often provide support by encapsulation in a Mylar envelope. This envelope enables you to view the materials, remove them for handling, and keeps them protected and flat (with a 20 or 40 point board for support).
This particular book was stapled at the spine. The staples had rusted away, but the pages were still collated and in tact. The book had also been stored folded. 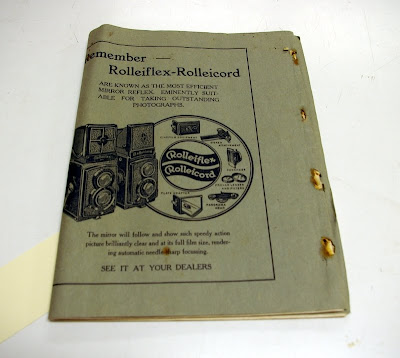 I cut a piece of board to the exact size of the book, and constructed the Mylar envelope. I began by folding a piece of Mylar in half and sharpening the fold with a bone folder. I put this fold into the mounting press. Then I used the crisp edge to cut the next side. I put the book and board between the Mylar sheets to measure the final side (the thickness of the materials must be accounted for). After removing the object, I cut and pressed the third side. The forth side was also trimmed, but left open so the object can be removed. This is the end result. 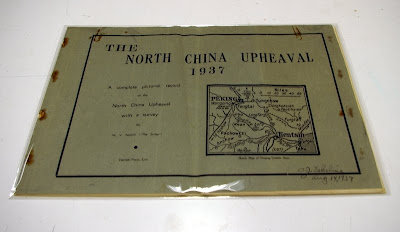 This book came through the lab on our end processing cart. There was mold on the front cover and on the first 30 or so pages. This is a picture from one of the worst pages. 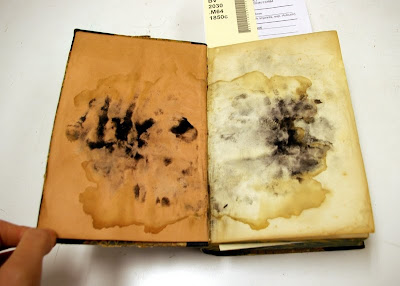 To remove the mold, I used a Nilfisk vacuum. These vacuums are great for mold because their chamber is completely contained, so there is no risk of it escaping. They also enable you to control suction strength and speed, for more delicate materials. All I had to do was run the brush attachment over the cover and each page, and it removed the mold spores. This is the same page after cleaning. 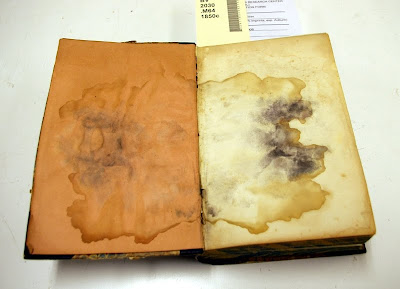 Note: Because mold spores can be inhaled and cause illness, it is advised for this method of treatment that a facial mask is worn and if possible, the materials are cleaned under a fume hood.
Posted by Sam... at 8:47 AM No comments:

These are two cloth rebacks I completed simultaneously. Thankfully for both books the sewing was in tact. This first book's covers were detached, the end papers were delaminating, the spine round was askew, and the first three pages were loose. 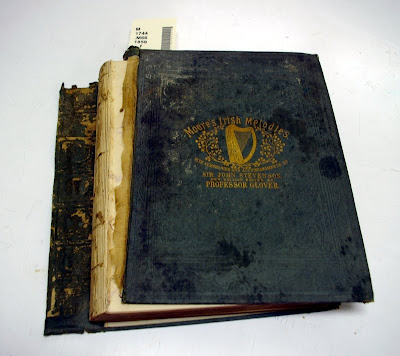 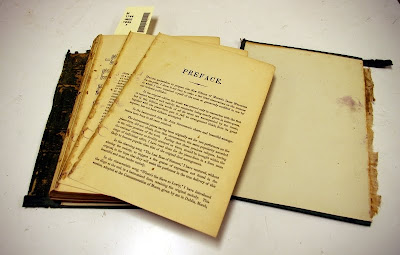 I started by tipping in the loose pages with wheat starch paste. Then I pasted out and lined the spine, with Japanese tissue and linen. When both linings were dry, I gently hammered the spine to fix the round. Then I proceeded with a reback repair as usual. This is the end result. 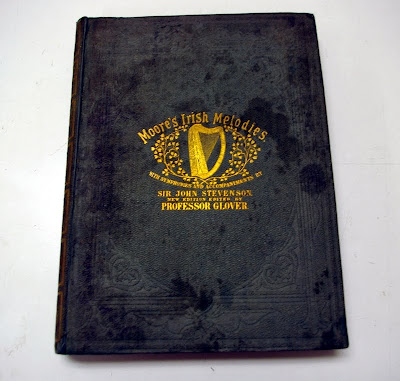 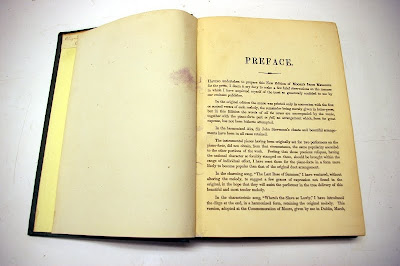 This is the second book. 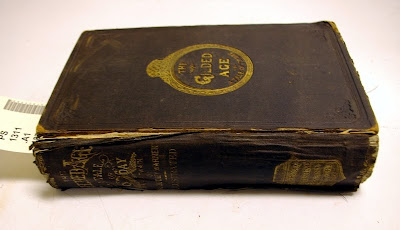 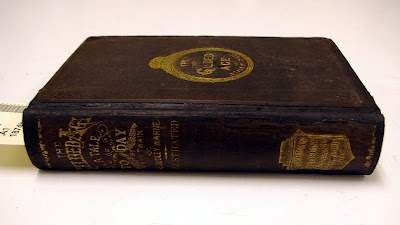 The Thread That Binds - Design Binding

For The Bone Folder's 2010 Bind-o-rama, the text block chosen was The Thread That Binds. I worked on this design in my book binding class. I decided to sew the text block on raised cords. The signatures were very thick, so I decorated the edge with speckled blue acrylic. The leather I had to work with was a thick, gray, morocco grain. For a color scheme, I decided to go with gray and blue. I sewed the text block with blue thread (so it would show on the exposed cords), and sewed blue and gray end bands. For the boards, I glued pieces of mat board together. This provided me with the thickness I needed to match the leather, and was easily shaped by sanding. (I had to angle the boards to be thinner at the spine, so that book could open easily). I attached these boards to the text block by fraying and pasting out the cord on them.
I pared the leather and cut away the middle with a circle cutter. I also attached this with paste, leaving extra material out at the turn in to construct the head/tail cap. Then I infilled the covers, glued down the paste papers and trimmed the turn ins. For the joint, I pared two strips of the same leather thin and pasted them down, overlapping slighting on the text block and on to the board. When those dried, I rubbed them down flush with a bone folder at the spine, then infilled the boards and cut sheets of gray Roma for the end papers. The board sheet was glued down directly on the covers. The fly sheet however, was glued onto the text block using just a thin bead of PVA along the spine and fore-edge. Finally, I painted the exposed area of the spine to match the paste paper. 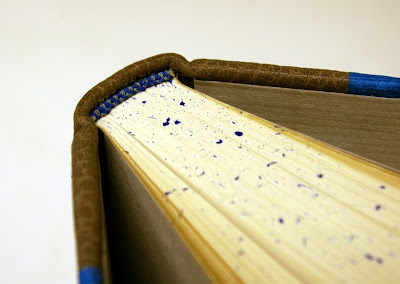 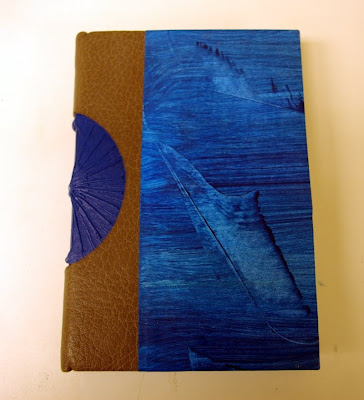 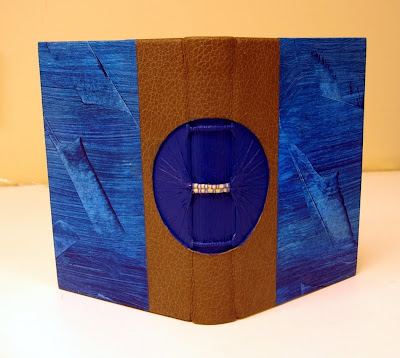 This is another book from the Syracuse University Ranke Collection that was a good candidate for rebacking. The sewing was completely intact (on raised cords), but the leather at the spine and joint was delaminated. 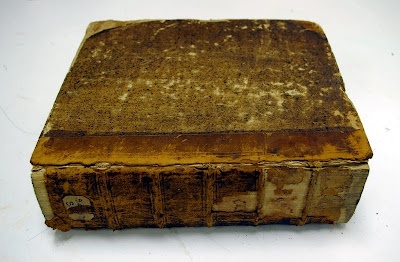 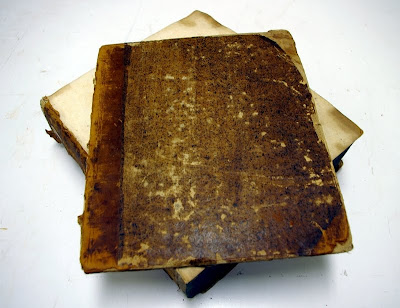 I was able to remove most the leather from the spine dry, and applied a thin layer of methyl cellulose to remove the rest. Then, I pasted out the spine, and lined it with Japanese tissue. While that dried, I cut strips of linen to be glued down between the cords. Then, I resewed the end bands.
Using a scalpel, I cut along where the leather meets the paper on the boards. I removed the old leather, and lifted the paper slightly. I also lifted the endpapers at the corners and at the spine, for the turn ins. (I also put some brown Morike underneath the lifted paper for support. The paper was brittle and kept breaking. Adding the Morike enabled me to handle it without causing more damage). I measured and cut the new leather and prepared it by paring, dampening with a sponge, pasting it out, and allowing it to sit for the paste to soak in. Then I reattached the boards by gluing out the linen strips and bringing them on to the board. I trimmed the linen so it only overlapped by about half an inch. Then I cut two strips of 10 point board, the exact distance from the spine edge of the board to about 1mm before the paper. This makes the transition between the new and old materials smoother. After gluing down the 10 point strips, I attached the new leather to the corners, and put some silicon release paper between the board and text block. Then I attached the new spine leather, running a bone folder along the cords to accentuate them, and leaving enough material at the turn in to construct the head/tail caps. I wrapped a piece of cord around the joint, and put the book in a press to dry. 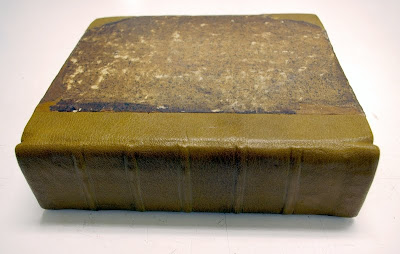 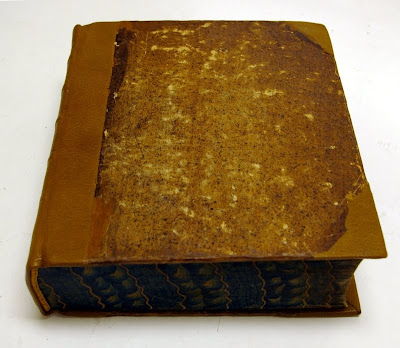