As previously mentioned, the wallpaper samples I have been working on had two distinct adhesives, spray mount adhesive and gelatin paste. The spray mount could be removed dry by splitting the backing board. I tried to split the board on the samples with gelatin pastes, but the board did not cooperate. I could not get the bone folder between the layers. After struggling with this for a little while, I decided to try wet removal (which is how I identified the gelatin adhesive).
On the first sample, after I had partially removed some board with the bone folder, I dampened the back of the board using a sponge and a spray bottle. When the board was damp, I was able to roll it off in small amount with my thumb. With additional moisture, this proved more successful and I was able to remove board all the way down to the back of the paper. At this point, I decided to try soaking the sample. I spot tested the inks and when they proved water stable, I moved the sample to a warm water bath (supported by Reemay) and soaked the sample for about 10 minutes. Then I removed the sample, flipped the tray and used it to support the sample so that I could work on it over the sink. I was able to sufficiently  remove the board by rolling my thumb over the surface and picking up the final pieces with a spatula. When all the board was removed, I pasted out the sample on a piece of Mylar and lined it with Japanese tissue. Then I dried it between Reemay and blotting paper under weight.
These images show a sample before treatment, after wet removal of the board, and with an untrimmed Japanese tissue lining. 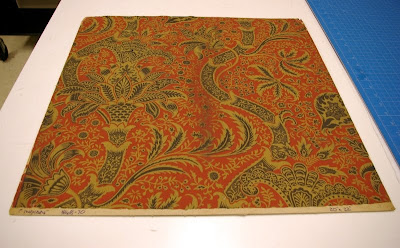 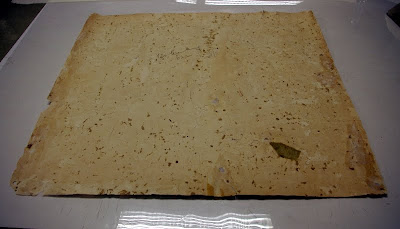 This process took longer, but the end result was much cleaner. I was able to remove ALL the board, unlike with the dry removal. And the risk of skinning the paper is greatly reduced as the adhesive gives.
Posted by Sam... at 9:55 PM